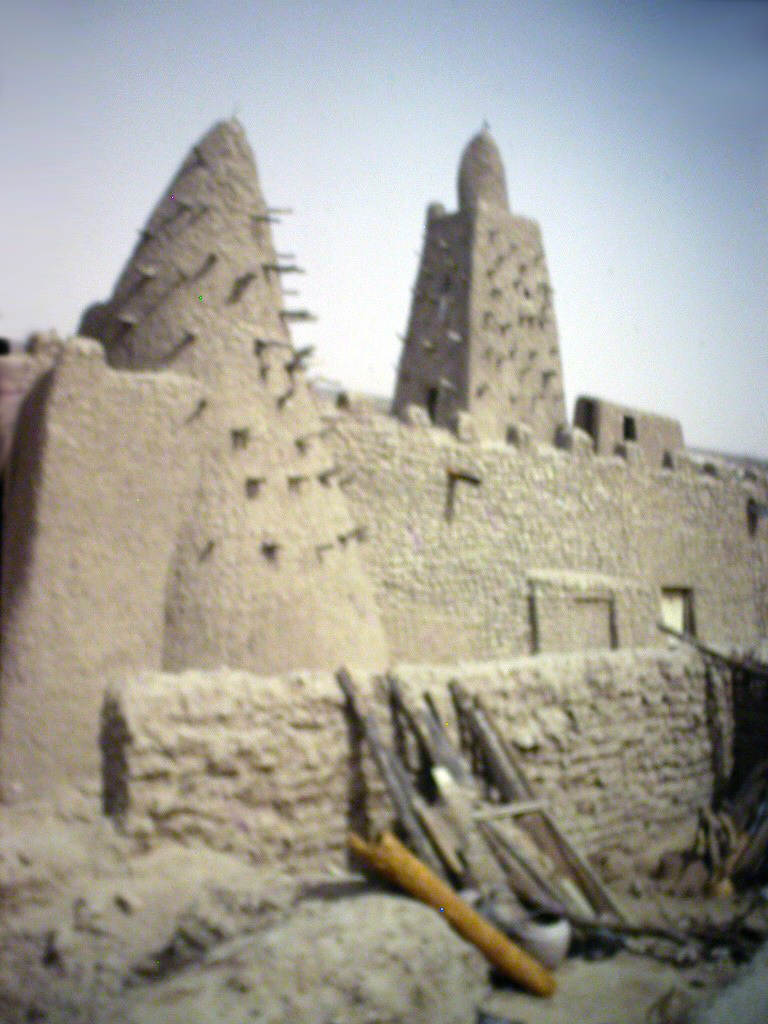 On returning from the Dogon to Sangha, I learned that I would be able to fly to Tomboctou. Otherwise it is a long single highway heading north into the dessert.  I was able to get a ticket on Mali Airways in Mopti to Tomboctou and then on to Gao.

Tomboctou has the reputation of being in the middle of nowhere, but it was the southern destination of caravans through the desert and has a storied history.

The small two-prop 14-seater plane was only half-full as we took off the following morning. It was open enough so that I could move from left to right window seat, so I could keep sight of the winding Niger River from our altitude of about 10,000 ft. As we approached the small Tomboctou Airport, a few km south of town, I could see the route south to the nearby Niger. It was not a place with many roads.

When we landed, I decided to head south 12 km to the river to wander along the riverbank.  I saw a huge riverboat which only operated seasonally. It would await the rainy season upriver in the Guinea highlands before it could resume service to Mopti and almost 1000 kms up the river to Bamako.  When you live in an extreme climate, businesses and people adapt to the seasons.

After resting for a bit by the river, I returned to the road to hitch a ride back to the airport and into the legendary town at the northernmost bend of the Niger River, Tomboctou.

My ride left me in the center of town – which was large sandy square with a central raised plaza.  At one edge of the plaza was a 30 ft high monument with a relief of a rider on a galloping white stallion.  It was now mid-morning, already becoming unbearably hot, and getting hotter.

I asked one of the few people about, “Où peut-on trouver une chambre simple?” – Where can one find a simple room?

They pointed me to the Eastern edge of town.  I found lodging, literally at the edge of town.   The room was simple and basic, which was perfect for my needs.  I planned to be out all day and just sleep here.

Outside the room was a bare concrete terrace which stretched for 30-40 feet along the eastern edge of the property, beyond which there was just sand and more sand.  Further were some seemingly neglected mudbrick and stone structures.

After quickly settling in, I wandered through this sandy desert landscape.  I noticed that there were limitless scattered bleached white broken bones.  There were some scattered trees, but mostly sand, some small stones, and lots of scattered bones like a movie scene from a desert where people didn’t make it to an oasis. About 150 meters from the terrace the land sloped down to an oasis-type pool where I could see a man collecting water.  I headed back to my simple perfect room, showered, then dressed and went off to explore the legendary city.

0 comments on “All the Way to Tomboctou”