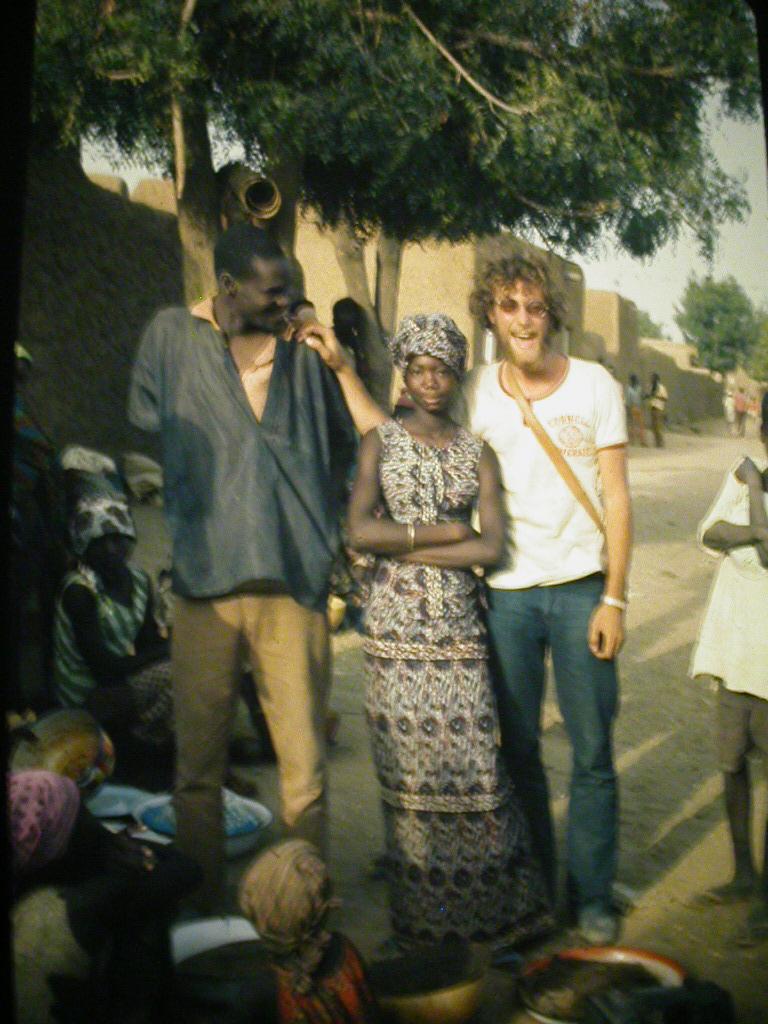 It was awesome arriving in Agadez! I had started across the Sahara on a whim in Algiers 15 days ago (inspired by a fellow traveler who’d just returned!), intending to hitch-hike the 1200 miles from Algiers to Tamanrasset – and then return to Algiers to resume my journey across North Africa, on to Rome (to pick up my mail at AmEx) and then to India!  I hadn’t planned on meeting Hiro, who was headed south to Ghana (after his hiking trip through the Hoggar Mountains).

As we approached Agadez, we could see the terrain change.  The flat, endless, featureless Sahara gave way at first to some scraggly trees, then more scattered trees, then a band of trees several hundred meters deep that stretched east and west as far as the eye could see.  It was still sand everywhere.  The “road” was a series of mostly parallel sandy tracks recognizable only by tire treads and low sand ridges defining the edges.

We drove by a market – mostly unoccupied (not a market day) with just a handful of people at a few of the shelters spread across a sandy field 100 meters wide by about 50 meters deep.

After a few more kilometers, we encountered a wall and some buildings on the left and then walls and buildings on both sides of the road, now more hard-packed.  We had entered the town of Agadez!  We stopped to pick up a local who had waved down the truck for a ride (see pic). We kept driving until we reached what seemed to be the center of town.  There were a lot of people, some of whom had been waiting for the imminent arrival of the truck from Tamanrasset.   We stopped.  There was a sign for “Hotel Bel Air and Restaurant” (see pic).

After taking some time to eat (and take some pix) we got back on the truck for the continuing ride to Zinder.  We reached the small town of Tanout by sunset, and camped out by the truck overnight.  Early the next morning we drove into Zinder, where we were welcomed and directed to a kind of simple way-farers shelter – a one-room building with a 20ft square mattress of-a-sort … where we were able to rest from our journey.

After a few hours rest, Hiro and I began to explore the town.  We walked first to the edge of town, where we discovered a kind of fort – a military base.  It seemed empty in the baking heat, so we walked in through the open gate and proceeded to climb the tower adjacent to the gate.  After climbing three stories to the top, we enjoyed a panoramic view – looking across the town and out into the nearby desert, until we heard shouting.   Apparently, some of the soldiers down below in the fort saw us, shouted at us to come.

“C’est interdit. Ceci est une base militaire. Laisser!” They shouted in French… “It’s forbidden! This is a millitary base!  LEAVE”

We quickly scampered down to the ground level, smiling and laughing all the way.  We met up with some soldiers, who smiled at us and asked us in French to leave.  (We were quite a spectacle: a blond bearded 5’10” American in a floppy hat with a 5’2” Japanese kid with his own floppy hat.  We were obviously from out of town!)

After walking 15 minutes, we came upon a large open space where a crowd was gathered around to watch wrestling matches.  We stayed for some time, then found a place to eat and returned to our “room” just before dark.  We were exhausted and fell right to sleep.

0 comments on “It’s forbidden! This is a military base! LEAVE”