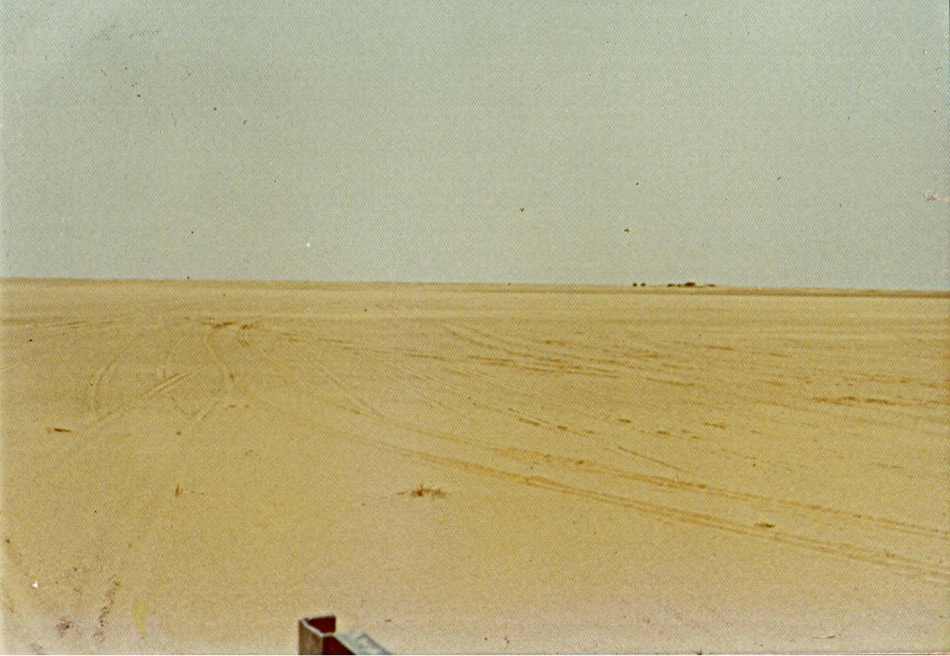 My Japanese friend Hiro (whom I met the day before) and I checked into Algerian Border Control and Customs at Tamanrasset early in the morning.  We had our passports stamped and then sought to find a ride heading south.   After a few hours, we managed to get a ride in back of a truck heading all the way south across the border to Agadez in Niger.

After a number of hours we reached a stark oasis with a concrete trough structure apparently tapped into an artesian well.  Pure fresh water rose through a pipe and into the trough.  The water continuously trickled out at the far end of the trough into a kind of a brook which mostly sank into the sands before reaching a single gnarled tree about 300 meters away.

It was a surreal, other-worldly setting.

There was a band of local nomads with their herd of goats, a few donkeys and camels.

There were men and children, alone and in groups.

We camped here for the night.

Just after sunrise the next morning we were off again south toward the frontier.

The “road” became drier and more sandy.   It was like a waterless sandy beach in all directions, with the sun beating mercilessly down on us.

I shot a picture of what turned out to be a mirage (image above) – a fairly vivid mirage of what appeared to be a distant grove of trees and some low building. The mirage was to the East.

It was several hours later before we caught our first glimpse of In Guezzam (Algerian Border Post), where we stopped briefly to have our passports stamped (with handwritten note).

After a few desolate kilometers after InGuezzam we reached Assamaka, the Niger border outpost.

When we arrived at Assamaka, around noon, there seemed to be no one in the Niger Duane (Border Post). We noticed that there were a couple of men bathing nearby in a narrow rectangular concrete pool (about 4 ft x 12 ft). It was bloody hot. I greeted them in French and asked them how they were, and they said, Fine, thank you, and said to please wait and they would meet with us presently. “Please wait while we finish bathing … “

The border guards were super friendly; they had us join them for a meal.

I didn’t have a visa for Niger (since I had initially intended to return to Algiers from Tamanrasset!), but they didn’t seem to mind.  They stamped my passport and wrote in it, “Vue a la rentree du Niger au Route ASSAMAKA, 16-3-72.  (Seen at the entrance to Niger via the route Assamaka.)

They wished us a safe journey.

0 comments on “Border Guards: “Please wait until we finish bathing…” Tamanrasset to Agades”