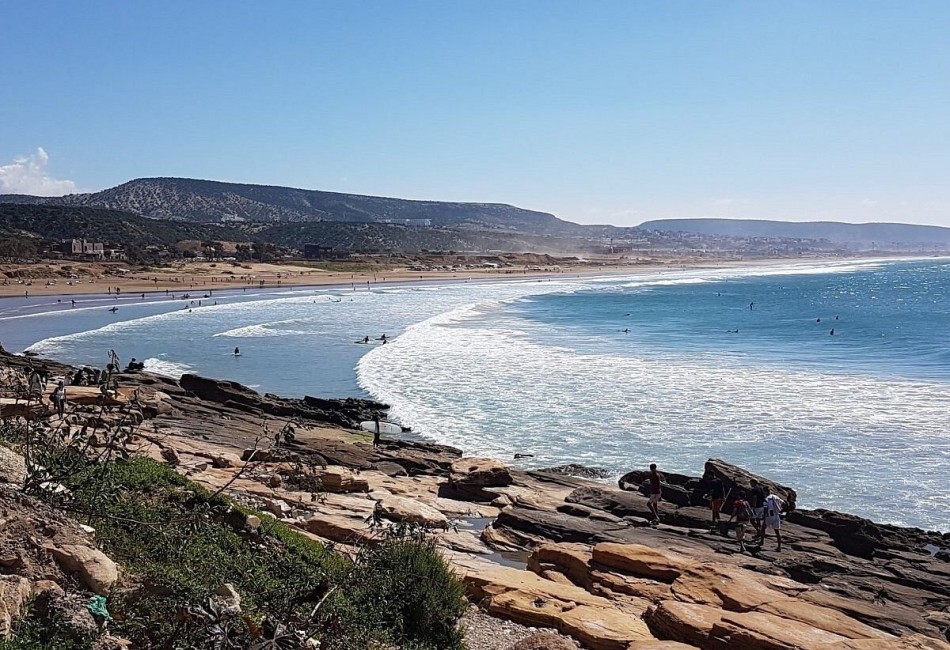 In Marrakesh, I was living as a student with a few dozen other fellow 20 somethings in a simple but safe and secure boutique hotel just a few streets inside the Great Gate at Jemaa el-Fna Plaza. The local folks were empathetic, friendly and supportive. The hotel was around the corner from The Hippie Cafe, where we would all go for breakfast, lunch, coffee, sometimes dinner.

Groups would gather and decide to explore deeper into the Medina. There was camaraderie among the young travelers and a sense that we were safer as a group, which was probably true. Few seemed willing to strike out alone.  After a week, the lure of the ocean drew me again.

From Marrakesh, I was able to get a ride back to the coast to Essaouira. It is a town with amazing Atlantic beaches, salty breezes coming in and African sun shining down.

There were many young people, mostly Europeans: German, Swedish, French and English, camped out there and no one bothered us. Many had little clear plastic tents for shelter from the rains or just for a European version of privacy. I spent time sleeping on and near the beaches for a couple of nights.

Most of the young people spent a lot of time sitting on the beach, gazing out to sea, smoking a little, hanging out with each other. Woodstock and the summer of love were only a year or so before.  The wind was a constant keeping the air fresh. Rain, when it arrived, came in strong waves off the Atlantic which limited the overnight stays on the beach. The nearby hostels were cheap and sheltered.

With the ocean to relax us, it was easy to lose track of time. I could have stayed for quite a while, but something in me wanted to move on from the land of the lotos-eaters but it was difficult to leave.

I was still aiming at getting to Rome and to do so meant heading away from the beaches and up into the Atlas Mountains through Marrakesh.

Instead, I kept drifting south along the ocean. I paused near Agadir on the beach in Terrazut (Taghazout) for a week of hash fueled, dreamy days. Then in Inezgane, a more Berber area of Agadir. On the beaches there were encampments of “hippies” and I fit in easily. It wasn’t hard to see how many travelers stalled here.

This certainly was not European tourism. No museums, no art galleries, no groups of tourists with clicking cameras looking for Michelangelo, Rafael, or Leonardo. That was behind me.  We were all young, happy, filled with ideas, carrying on long conversations that drifted into the philosophical realms.

Some nights, even with a bed in a nearby hostel, I curled up in my djellaba and slept in the open air on the streets or on the beach with the even beat of the waves drumming me to sleep.

I woke up one morning near Agadir and realized almost three weeks had passed since I arrived in Morocco. Time had been drifting away without hardly a notice.

I decided to head back to Marrakesh for a few days, then return to Rabat to catch a train to Algiers where I could once again continue to Europe and my initial plan.

After some breakfast, I looked for a ride on the road east into the Atlas mountains en route to Marrakech. I encountered another traveler, a Swede named Sven. We managed to catch a ride together to Taroudant, then on to Oulad Berhil, a small town with a fascinating old Kasbah.

After a good night’s sleep in the old town Oulad Berhil Kasbah, we got a ride 5 or 6 km to a junction where the main road branched north to Tizi n’Test and Marrakech or a long way east towards Ourzazarte to the southeast of Marrakech.

We waited at the crossroads for hours. It was obviously a road less travelled.

The road was completely deserted, no signs of life in either direction as far as the eye could see. The road skirting the southern foothills of the Atlas Mountains.  After a few hours, a motorbike approached and stopped. Sven took the offered ride – with my blessing.

He had a fancier and more comfortable pack than mine that could more easily bump around securely on his back. They sped noisily off and bouncing up the mountain road ahead; leaving me in silence.

I continued to wait.  And wait.