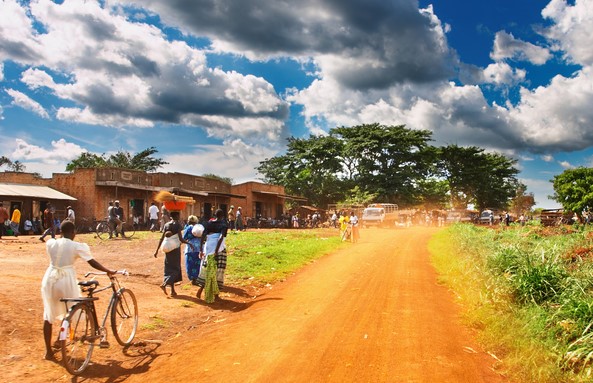 I entered Uganda with my Yugoslavian mining engineer friend, by wining and dining the border guards at Bunagana. My visas were all in order and we were speaking English again. It was easy getting a ride through Mbarara on to the major cities of Entebbe and Kampala.

The countryside of Uganda looked like a vast parkland, littered with animals I could see moving in the distance.  Fences were few and usually around small settlements like those I had seen looking down from the high telecom tower at Bouar in CAR.  Everywhere looked green, filled with tropical vegetation laced with rust-colored paths winding through the palms and bush where people lived.

At Entebbe, I spent a couple hours wandering along the shore of the great inland ocean, Lake Victoria, principal source of the Nile. The Lake is huge but shallow, second in area only to Lake Superior. It looks as vast as an ocean from the shore.  I didn’t swim, as inviting as it was in the noon day heat, due to concerns for the parasites causing River Blindness and other water borne problems (not to mention the Nile crocodiles). After a few hours of relaxing on the shore, I turned and went back to the road to catch a ride to Kampala, only 34 km away.

The thoughts of an ocean had been growing in the back of my mind for a week or so.  I was coming closer to my goal of crossing the continent of Africa by land. I was dreaming of seeing and swimming in the Indian Ocean.  Soon, I hoped.

Kampala, the nation’s capital, was set on a group of hills that rose from the sweltering equatorial plain.  At the time, the population was about 400,000, much less than the more than 1.5 million who live there today.

I got off the back of a pick-up truck hauling grain from Entebbe near the edge of town and, with luck, caught a ride right away with a 20-something Indian, named Arjun, who was headed home after some errands.  He asked me where I was from and how I got to Kampala.

I told him that I had hitch-hiked from Tangier to Algiers, across the Sahara, through West Africa, up the Congo River and was en route to Mombasa and then Bombay.  He was surprised and intrigued.  After we chatted a while, he smiled broadly and asked me if I needed a place to stay that night.  I smiled back, “YES!” that I needed a day to get visas for Kenya and Tanzania. I already had obtained my Visa for India in Paris.  Ahh, paperwork! Arjun, his brother, sister and parents, lived in a very nice apartment in Kampala.  Most of the family were at their shop, where he was also headed after we had a bite to eat. On arrival, his mother made us a wonderful Indian vegetarian lunch.  Afterwards, Arjun and I walked the short distance to their shop where he introduced me to the rest of his family. He encouraged me to wander about and enjoy Kampala.  He reminded me to be back to their home by 7 pm for dinner!

He also directed me to the British Foreign Office Passport Control Service which still handled the Visas for all the British Commonwealth countries. It was a one-stop-shop with British civil servants and their local mostly Asian Ugandan clerks.  I was in the heart of East Africa enjoying the efficiency and organization of the British Foreign Service.  Visas achieved.

A word or two about finding South Asians in East Africa as context for those unfamiliar.  Arjun’s family, like many others, had lived in Kampala for many generations. They were brought by the British as a buffer between Europeans and Africans in the middle rungs of business and bureaucracy. By 1971, almost 100,000 were in Uganda and they were the backbone of government.  They dominated the economy. Everything ran well, thanks to them.

Then came Idi Amin, in 1971, earlier that year.  Shortly after my visit to Arjun and his family in 1972, Amin announced the expulsion of all Indians from Uganda. He defended this by stating that he was “giving Uganda back to ethnic Ugandans.”

Amin blamed them for his regime’s failures and excesses.  The Indians left Uganda for the UK, Canada, India, Pakistan and neighboring Kenya, taking their skills and abilities with them.

The expulsion of Asians from Uganda had dire effects on the Ugandan economy. The country lost doctors, technicians, business owners, and engineers. Railways were compromised; there were food shortages and prices skyrocketed. The economic foundations of the country started to crumble.

Visas in hand, I enjoyed walking around this beautiful East African capital before leisurely returning to Arjun’s family home for dinner.  Dinner was delicious with stimulating conversation.  They were hospitable and delightful people.

I got a good night’s rest in a spare bed in the family’s sprawling apartment and left equipped with a hearty Indian breakfast. I set out for a day of exploring, with plans to return for dinner and another night with my generous hosts.

It was a novel experience being able to walk freely without having to carry my backpack – which was safely stowed at Arjun’s home.

After a couple hours wandering the center of the town, I sat on a bench in beautiful park surrounded by broad avenues and groves of towering trees. It seemed to be a city of parks.

While resting there, a 30-ish European fellow saw me, stopped his Land Rover, and came over.  He asked me where I was from and how I had reached Kampala.  It was another case standing out by looking quite unlike anyone else around. I briefly told him my story… as a student hitch-hiking across Africa, on my way to Mombasa then India.

Hearing I had travelled through several French countries, he asked me if I spoke French. I said “mais oui” in my best Parisian French.  “GREAT!” he said.  He was leading a group of 5 Land Rovers touring from Kampala to Cape Town, and they needed a guide familiar with traveling through Africa, who spoke French!

“How lucky I found you” He asked if I was interested. I was, however as much as I might have liked to join, I couldn’t do it.  I had to get to Mombasa and India soon to get to Japan on schedule.  Plus, I was politically opposed to South Africa’s apartheid since reading Cry, The Beloved Country.  So, I declined. Not all opportunities are worth pursuing.

He left me standing by the curb at the edge of the park.  A Kampala city bus stopped next to me.  I could see the bus driver glaring at me.  He opened his door, gesticulating, screaming at me “SHAVE YOUR BEARD, HIPPIE!  CUT YOUR HAIR!  GET OUT OF UGANDA!”

I was stunned.  Then I remembered my Yugoslavian friend as we crossed the border had warned me Idi Amin had just issued Decrees making Facial Hail and Miniskirts illegal.  I was not wearing a miniskirt!

I was determined to get my beard and the rest of me out of Uganda the following morning.  The entire Indian population would begin to leave soon after.

0 comments on “SHAVE YOUR BEARD, HIPPIE!  GET OUT OF UGANDA!”