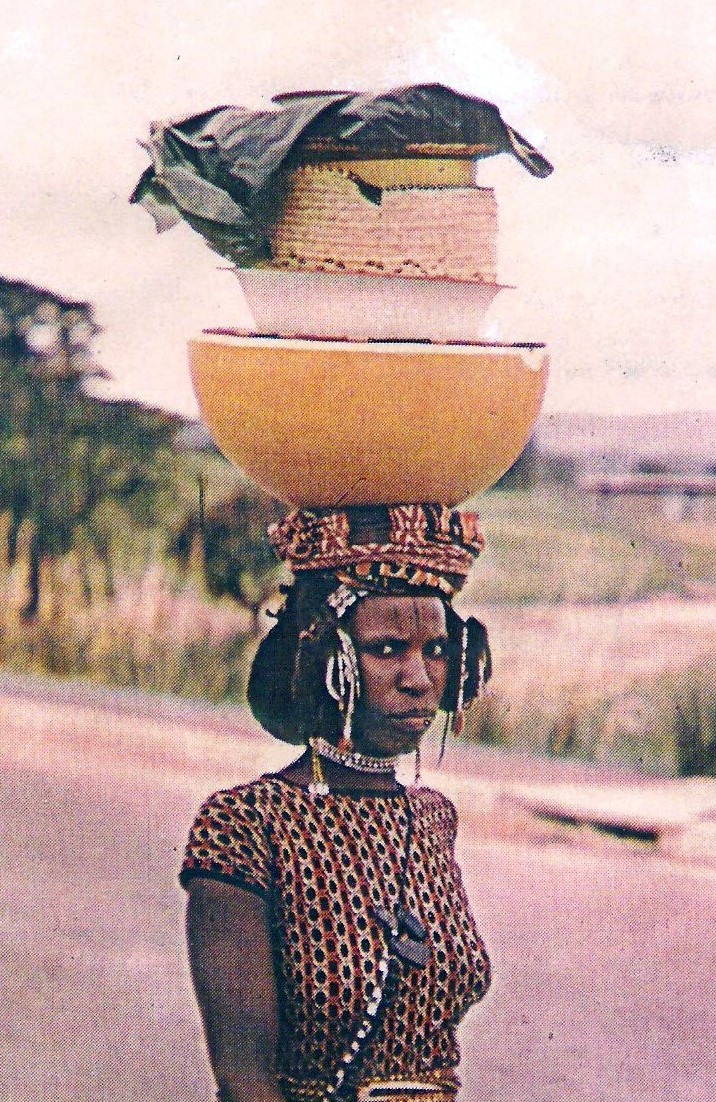 It was hard to leave idyllic Yankari Wikki Spring and pool, but I had to keep going. It had been an invigorating stop, yet I had a long way to go through central and East Africa to catch a boat to Bombay.

I was able to make good time hitching a ride on the back of a truck to reach Maiduguri June 7.  Maiduguri had an other-worldly landscape with huge boulders seemingly scattered about like a giant having a tantrum.

From there, I headed off early towards the Nigeria–Cameroon border town of Mubi.

It was a spectacular countryside which meant it was easier to manage a full day without getting a ride and not be too upset about it. I was on a secondary dirt road and there were no vehicles crossing into Cameroon.  Like many I had followed, it was a road less travelled.

It was only later that I understood that I had gone too far south from Maiduguri, following what seemed to be the relatively main route to cross into Cameroon on my French-produced Michelin map.  Nigeria is an English-speaking country, so maybe the map misled me.  In retrospect, I realized that I should have crossed further north at Kirawa, Nigeria direct to Kourgui-Mora.  But that was later.  Sometimes a bad map can help you find discoveries you weren’t looking for.  This time it did.

Early the next morning it was just as quiet. I asked the nearby Nigerian border guards for their advice; they suggested I could just walk across, and I would reach a more promising north-south road in Cameroon.

So, I started walking. The land was parched with small, poor fields. It was baking hot.  The sun was relentless. It was desolate in this remote border area between Nigeria and Cameroon.

After walking 3 or 4 kilometers into Cameroon, I stopped to photograph one typically parched field with one lonely woman working it.  She was bending over, tending her sparse crop with her infant baby wrapped in cloth on her back. She scratched at the ground, pulling weeds, bearing the added weight of her baby. I imagined how hard life would be for the two of them and what prospects they might have.  But it wouldn’t stop them from continuing to try.

She was the only person to be seen since I had started walking across the border. I wouldn’t see anyone else for the next 10 and more stifling hot kilometers ahead.  I felt like I was melting into Africa.

Finally, I reached the secondary north-south road and after 20-30 minutes, I caught a ride north to Mokolo.  There I happily found some simple places to eat and turn in for the night.  I was exhausted and probably a little dehydrated, but once again excited to be moving towards my goals again.  The countryside there resembled another planet, a lost world.  There were basalt intrusions that were left from volcanic eruptions.  They jutted up like temple spires around the countryside.  Giant fangs emerging from the ground.  They had spiritual significance for the local people, and no wonder.

Wherever I went in this far north tip of Cameroon, I was the object of extreme curiosity. This Fulani area was far from the usual travel plans for Europeans.  People went out of their way to be kind to me, but I realized I was their curiosity for the day.  Particularly kids.  Little beaming faces looked at me like I was an exhibit from another planet. When I descended from my perch in the truck I was usually riding in, the local kids often flocked around me.

I would accommodatingly squat down in their midst, and they would often gently reach out and touch my blond curly hair or beard, or even touch my white skin to see if it was real. I have heard a lot of black people tell stories of how white people will touch their hair or their kids hair our of wonder. Well, I do know that experience. And I enjoyed it.

On the following morning, I was able to head south on a more travelled road to reach Maroua, which was the northernmost main urban center of Northern Cameroun.  Once there, it was easy to catch a ride south 280 km to Ngaounderre, where I was dropped off near a bridge across the Vina River just below the falls.  The Vina wanders through Cameroon, joins the Logone through swamps and wetlands to eventually arrive in N’Djamena the capital of Chad as the major tributary of the Chari River.  These rivers were the original highways for the region.

I caught a ride in old rattly truck needing paint and welcomed the idea of sitting in a seat watching ahead rather than in the back deck leaning against the cab.

As we slowed and approached the river, I saw four tall powerful looking women in colorful dresses, each with huge containers stacked on their heads.  They were on their way to market.  Their noble bearing was accentuated by the erect posture needed to keep the pots and bowls balanced.

Three of them looked at me curiously, but one glared with a side eye look that seemed to say “what is something like you doing in my corner of Africa?”  She left me with one of the most extraordinary and my most memorable images of Africa with just one look.

By June 12, I was able to reach Garoua-Boulai in central Cameroon – still far from major population centers, but a town, nonetheless.  Garoua-Boulai sits on the border to Central African Republic (CAR), my next destination as I wandered eastward.

I tried and failed to get a ride into Central African Republic from sunrise to sunset all day for the next two days.  I worried that I may be stuck in the heart of Africa.  By the second day, a local man, who might have once seen me as a tourist, now saw me as a homeless vagabond, not worthy of staying in his town.  He came over to bully and threaten me if I didn’t leave – something I certainly wanted to do.  I slept uneasily on the border that night.

When you rely on the kindness of others, you must be patient.