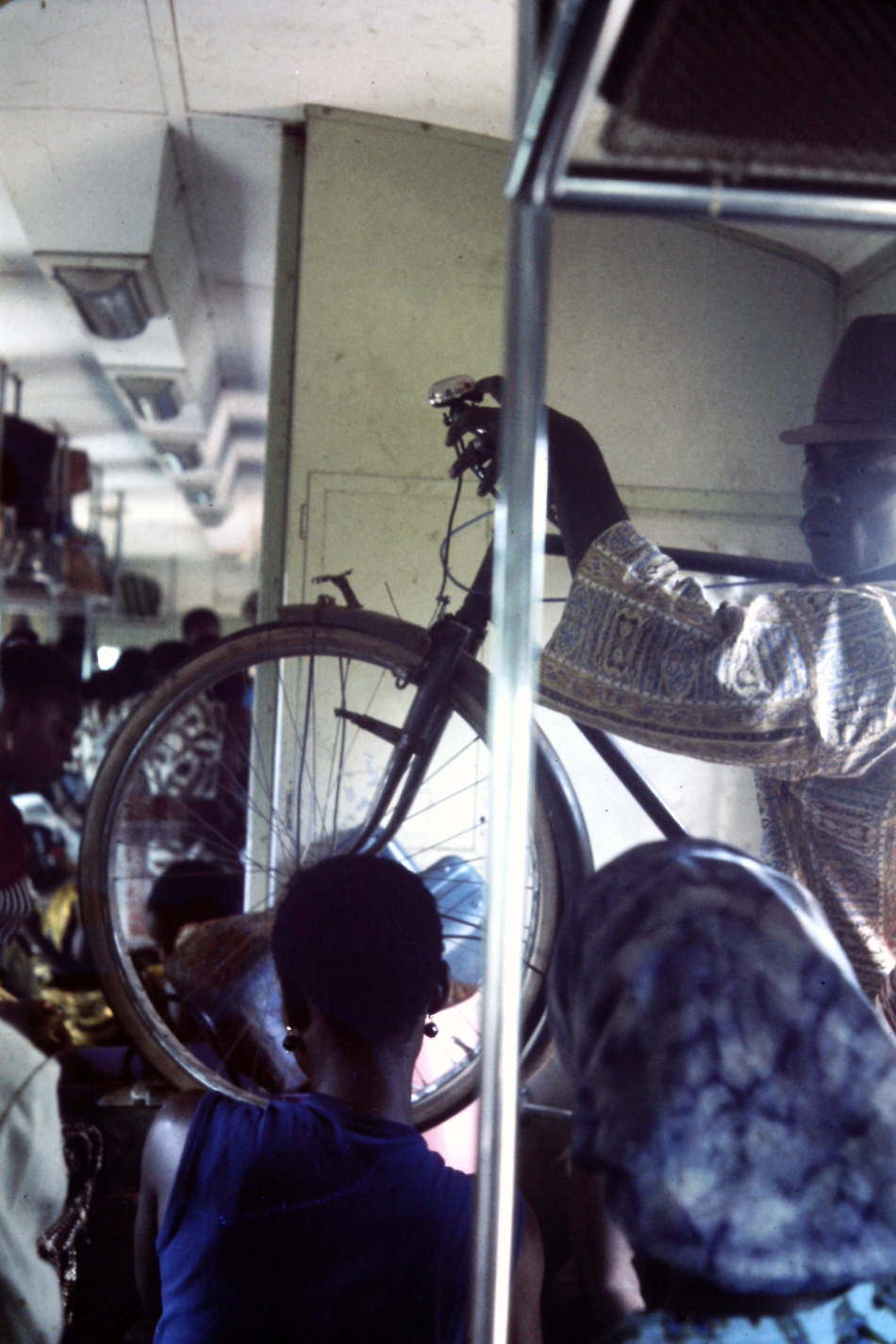 Dr. Hans-Peter Richter drove Hiro and me from Savalou half an hour to the nearby Dassa-Zoumé Train Station when our urge for exploration overcame the relative luxury of our private hospital rooms at Savalou Hospital in the middle of Dahomey (Benin).  The railway had not come to Savalou. The King in those days refused the railway. He was afraid that his women would run away. (History courtesy of Hans-Peter, who was enlightened by locals who share such stories only with those they accept, know and trust.)

We were excited to be travelling by train, certainly a step up from the backs of trucks.  The train would take us all the way to Cotenou to complete our crossing from the Mediterranean to the Atlantic coast of West Africa. It sure was an unexpected treat to end our cross-continental journey in style!

After buying our tickets for about 50 cents, we managed to find a place in a coach next to a large window.  It turned out to be less than the luxury we imagined. The train was soon crowded with no space left in the interior of the car that was not occupied by someone, some animal or all manner of what could pass for baggage.  Baggage ranged from bicycles to food boxes to chickens & goats and all things in between.  We were only able to get seats because we were early.  Thank goodness for German promptness over local African time. Now we were crammed into place. Early access to a market can bring some benefits.

After an hour sweating and baking in the crowded car, we felt a few lurches and the narrow-gauge train started to move.  The train haltingly accelerated to a top speed of perhaps 30 miles per hour. Still, it was less dusty and bumpy than the back of a truck as we passed along the 112 miles (180 km) down to the coast to the capital, Cotenou.

Hiro and I were an object of considerable curiosity to our fellow passengers and to the people we encountered in the villages where the train stopped or slowly passed through.  It was the local; there was no express. There were stops like Cococodji where vendors sold snacks to passengers.

After about 5 hours, we arrived in Cotenou. We first looked for the beach so that we could formally greet the Atlantic and dip our toes in the water. There was a European hotel on the beach. There we indulged in the luxury of a conventional European meal with beer. Extraordinary.

The next morning, we headed west on the road to Grande Popo. We had heard was an interesting spot with a spectacular beach. Grande Popo sits on a barrier island that juts like a narrow finger along the Atlantic coast of Benin a third of the way across Togo.  On one side was the ocean, the other side was a lagoon with a few small rowboats and some dugout canoes resting on the shore.

When we arrived in Grande Popo, we saw laughing school children in light blue and white uniforms.  It seemed like such a bright, carefree and happy place.  Everywhere we walked, we smiled and everyone we encountered smiled back.

We walked steadily to the beach we could see nearby.  We left our packs on a rise and put on our bathing suits.  We could see hundreds of meters all around us with no one there… the beach stretched out as far as we could see to the East and to the West.  We could only see palm trees a few hundred meters up the slope from the shore.

We savored the moment as we walked and then ran into the surf!  It was GLORIOUS.  We had made it from the Mediterranean through the dry and dusty Sahara to the Atlantic Ocean in West Africa. I felt connected with home since I had swum in this same ocean thousands of miles away in the U.S.  I had a profound sense of joy and relief at having reached this goal.

We hung out for some time in the ocean, soaking it in. We were emphatically alone with no other soul in sight. It felt sublime after the weeks in the dessert.

2 comments on “Riding the Rails to Cotonou”