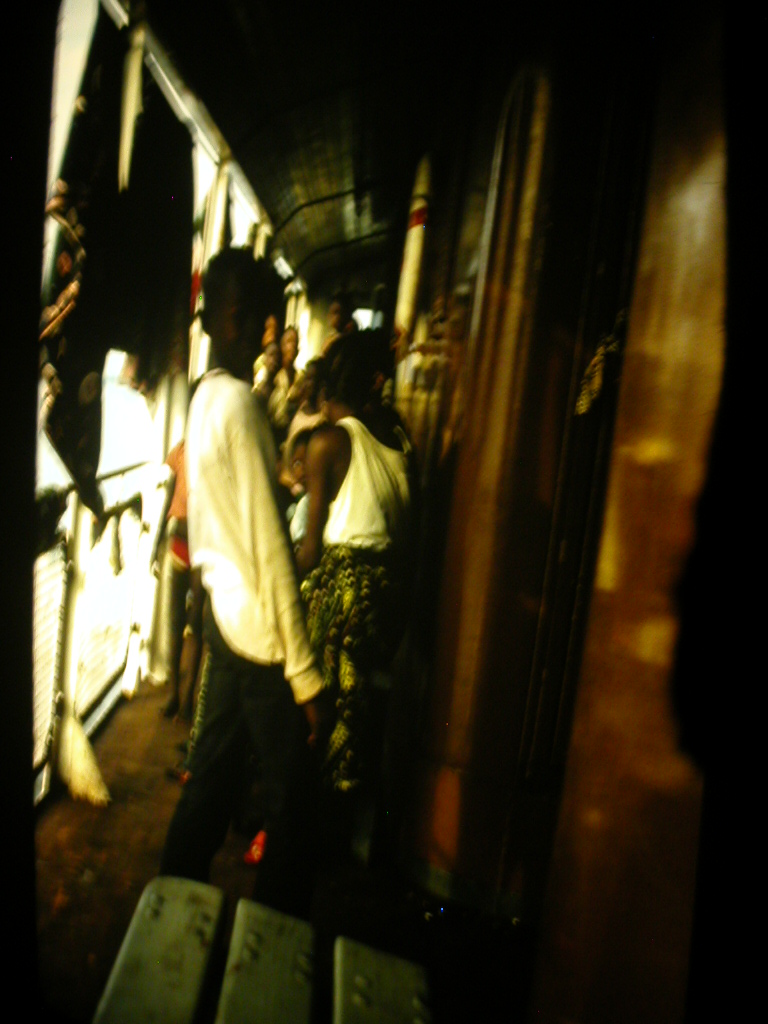 After 3 days staying with my Canadian hosts in Mbandaka, I booked a passage for the 6-day trip on a Congo River barge upriver to Kisangani (formerly Stanleyville).  It was a passenger boat in 1970s Congolese terms, but the accommodations were very basic.

The passenger barge was made entirely of metal.  Each “cabin” had 4 metal bunks with 2 upper and 2 lower bunks. There were no doors to keep the air flow.  The boat was completely full to overflowing.

I was lucky. As the only foreign traveler on the boat, I was adopted and welcomed to have all of my meals with the captain.  This is not like being on a luxury cruise today.  The Captain or one of his mates sought me out to join them for every meal. The dinner menu (just kidding, there wasn’t one) included monkey, which we had a couple of times.  I had had it previously, so I wasn’t squeamish – protein is protein on the Congo River.

As we travelled upriver, some passengers were fishing from the boat. One day someone caught a fish which we all ate for dinner that night.

The six days on the boat was a kind of a blur. It was cacophonous virtually all day all the time.  It was hot; it was humid. I was exhausted and slept well every night as the breeze on the river kept us cool. The sky was alive with the Milky Way – no pollution, no lights, just a sky that seemed to come down and touch you.  It seemed so close, so big.

As a non-African, I was initially an object of great curiosity, but that gradually faded as the days wore on.

Our boat would stop along the way at major towns, to discharge and take on passengers, and to deliver and receive cargo and goods.  The scenery of the river and the surrounding jungle was spectacular and sometimes foreboding.  We passed the Mongala River whose tributary, the Ebola, would become famous later for its deadly killing disease.

The Congo River was the only lifeline through this massive equatorial forest jungle.  This passage was the trip chronicled in Joseph Conrad’s Heart of Darkness.  The river is wide, it is massive, at times you can’t see from one shore to the other.  We were going against the flow, but we pressed on.

After 6 days we arrived at Kisangani, the final stop on the navigable part of the river.  We got there in the middle of the night on July 13 – at about 3 or 4 in the morning.

We docked in pitch darkness with just the Milky Way in the sky.  There were also some spotlights on the bare concrete pier about 20 feet above the deck of our boat.  Each of us had to climb up a ladder to get to the pier above.

There were a couple of young soldiers with machine guns strapped to their backs guarding the dock. One of them reached down to help me surmount the last few rungs on the ladder.  The soldiers looked to be boys 15 or 16 years old.  They might have been armed, but they were friendly.  I guess this duty was left to the youngest soldiers.  It wasn’t long before that Christophe Gbenye and the Simba Rebels had been marauding this area.

I wandered away from the river into the deserted town in the extreme darkness.  There were occasional streetlights.  I eventually reached a building with a large empty open concrete porch.  There I lay down and took a nap until sunrise.

At sunrise, I awoke and found the long winding road east towards Bafwasende that would take me on to the cloud forests of the Ruwenzori.

3 comments on “Mbandaka to Kisangani on the Congo River”