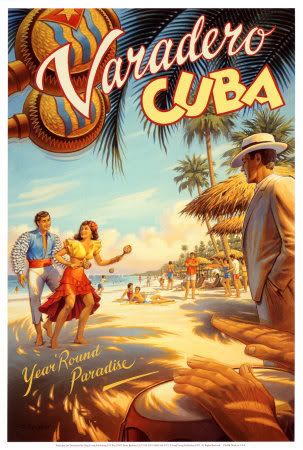 My flight from freezing Ithaca, NY left early on my Christmas Break to Florida in 1968.  We arrived early at JFK, so I decided to take an earlier 9am flight.  I was in the back in a long and narrow stretch DC-8.

About 30 minutes in, there was rustling and some sound and laughter wafting back from the front of the plane.  After a bit, the pilot came on the speakers and said,

“Well, folks, as some of you might have already heard, there is a young Latin man with a hand-grenade who wants to go to Cuba, so we’re flying to Havana.  Your cabin crew will be serving breakfast, with drinks compliments of Eastern Airlines.  So, sit back, relax and enjoy the flight!”

The stewardesses came back and offered us drinks, including Bloody Marys, along with breakfast.

I was in the smoking section (yes, there were such things), along with several other college students on break – all of us celebrating our good fortune of having unlimited drinks on-the-house!   This was already so much more fun than just going home for Christmas holiday!  Hijackings were still benign in those days.

About noon we landed at Havana Airport, and taxied to a stop near a small, simple 2-story Terminal.  Stairs were rolled up to the front of the plane, and apparently our young hijacker (and his hand-grenade) were whisked off the aircraft by the Cuban authorities.

The front door of the plane was open, while we baked in the sun for 30 or 40 minutes.  The stewardesses continued to serve drinks.   I was already pretty happy.

Then a man in overalls came down the aisle spraying insect spray to the right and to the left all the way town to the tail and the continued spraying all the way to the front and out again.

It was very hot and very humid.  Another official came through counting heads.

We were baking and sweating in the heat and humidity wondering what would happen to us in a hostile country.  Half an hour later, all 168 of us we were conducted out of the plane and directed into three small waiting rooms in the Havana airport.  The Cubans had busily prepared for us while we sweated.  There were ham and swiss sandwiches on sesame buns, fresh orange juice, Turkish coffee – and cigars!

After an hour, we were conducted upstairs to a proper restaurant for a more serious lunch of steak, potatoes, vegetables … and wine for anyone who wanted it!  As a student, this was heaven not Havana!

Then they guided us out to 5 buses!  We drove to Havana, where we seemed to be on a tour bus through Sunday in Havana, past an ice cream shop and people all about enjoying their day.  We drove out of Havana to the Varadero Resort west of the city.   As I checked into the front desk, I was a given a key to my room, told that I could relax and enjoy the pool, and that dinner and a show were at 8!

Sure enough, when we arrived a little before 8 at the restaurant and showroom, there were 20 KGB and Stasi agents enjoying their cigars and drinks… and now these 168 Americans.

Dinner was many courses … with the staff offering us unlimited drinks including bottles of scotch, vodka, wine and champagne!  There was a 60-70-minute gala show with entertainers on stage singing and dancing!

After dinner, we were told to return to our rooms for the night and that we would be notified when we could go home.  We returned to our rooms, and I went to sleep.

I was awakened at about 1 am by banging on my door.  The stewardess at the door was telling us that we had been “bailed out” so we could go home.  … It was pouring rain as we returned to our buses for the short drive to Varadero Airport, where two Eastern Airlines Lockheed Electra Turboprop planes were waiting.

Once we had boarded and were preparing to take-off, the stewardess on the com said, “This is the Eastern Airlines Varadero to Miami Shuttle.  Fasten your seatbelts and enjoy our short flight to Miami.”

It had been a brief, unexpected vacation where we were all very well treated by unexpected hosts.

I learned later, during this period, hijackings were a significant source of foreign exchange for Cuba.  When a plane was hijacked, the quid pro quo was that the Cubans would arrest and jail the hijackers, and care for the passengers.

The Cubans would provide as much hospitality as the passengers would accept, and account for all and send a bill to the Americans via the Cuban Embassy in Zurich, Switzerland via the Swiss to the American Embassy, and then the bill would be passed on to the appropriate airline (in this case Eastern). Eastern Airlines would pay the bill, there would be a bank transfer in Switzerland – and we would then be notified that we were free to go.  Once the transaction was complete, the Electras would be dispatched to Varadero to fly passengers to Miami.

Such was all-inclusive Cuban US tourism in the cold war.  A hidden market they didn’t teach at the Cornell Hotel School.

0 comments on “Hijacked to Cuba, Or Getting the Most of an Unfortunate Situation”